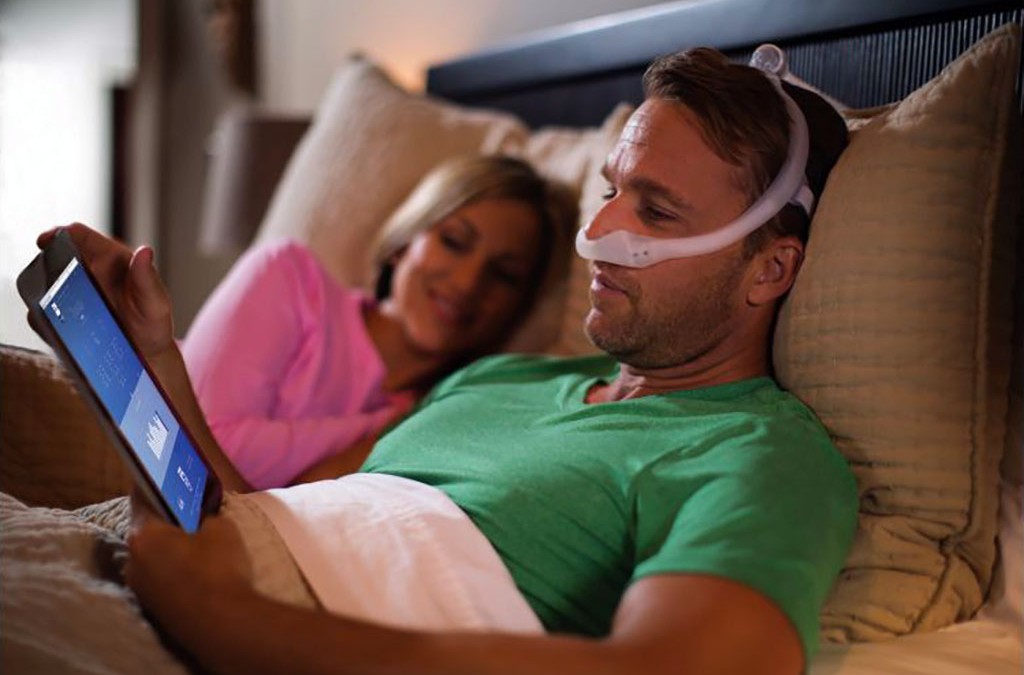 CONS: Prone to leakage in certain positions. Dual vents may create noise. May be difficult to clean and dry.

OVERALL: Another mask from Respironics that tries to merge a number of designs that may cater to a certain group of CPAP users.

Recently, Philips Respironics has been prepping us for the release of their “Dream” line-up. Although I might not be authorized to announce the upcoming release of their new Dreamstation CPAP/ BiPAP line-up because Philips want to keep it “hush-hush”, they have however, released the Dreamwear mask for all of us to start dreaming about what’s to come. Over the past few years, Philips Respironics has struggled to develop a mask that competes with the Resmed and Fisher& Paykel line of mask offerings, so this time instead of trying to imitate the designs from their competitors, they finally tried to completely change the design with the Dreamwear nasal mask.

For those who have not seen it in person, you might be deceived by the pictures that have been published online. Is it a nasal mask or a nasal pillow mask one might ask? Well let’s just say it’s a hybrid of both designs. Don’t be mistaken by the hybrid designs of the full face mask like the Liberty Mask from ResMed; this one is completely different. A number of years ago, Respironics released two masks similar to this called the comfort Curve and the Optilife but they didn’t really gain much traction in the industry and to be honest were short-lived. Let’s just start by saying, that the Dreamwear is better than those masks.

As I’ve always done in the past, I have based this review by using this mask for 2 weeks and putting it through the paces. I have reviewed it based on visual appeal, comfort, performance, noise, and durability. In the event a mask is too intolerable to last the 2 weeks trial, I will provide the details of my finding over the duration I used it for. Fortunately for the Dreamwear, it did pass the 2 week challenge so here are my findings.

Visual Appeal: The Dreamwear design, as I mentioned earlier, is quite unique. It combines the nasal pillow look with a cushion design. But it is nothing like a ResMed Swift Nano or ResMed N10 because the cushion cradles the nose underneath and delivers the pressure through a small opening instead of a large opening around the nose. Though it tries to mimic a nasal pillow for the look, it is completely free of a funnel up the nostrils. This was intended to be the main “advantage” of this mask design and I’ll discuss that more in the comfort section of this review.

The problem however is that the tube design that delivers the air was altered significantly from the traditional design by incorporating it onto the “headgear” of the mask. This resulted in the design using a flat, wide, and hollow silicone that runs around the cheeks and up above the head. Held in place around the head by a headgear similar to the Philips Respironics Nuance/ Nuance Pro that they released in 2014. In all honesty, it looks odd on the face because most nasal pillow designs try to minimize the material on the face but this goes against the grain. But! you know what they say? “Beauty is in the eye of the beholder”.

Comfort: I have to admit, when I first put this mask on, it was quite comfortable. There was no impression of too much weight like the gel pads and gel pillows of the Nuance Pro, but it may take a number of attempts to find the right size of headgear that won’t cause the mask to ride up behind your head. The cushion that cradles the nose is actually quite comfortable too. I can imagine it to be beneficial to those who were trying a nasal pillow but have narrow or irregular shape nostrils that resulted in an irritation to the septum. The headgear behind the head is flat but they created this dual strap that was interesting. Though it was said to be used by people who wear a pony-tail, it’s completely useless for people with short hair and can sometime bunch up causing a slight bump.

Performance: For me, this mask performed decently during the 2 week period. I used it with a Respironics PR60 with heated tube set to an APAP mode of 8-15 cmH2O . I don’t typically use the ramp function but I set a ramp time to 20 minutes starting from a CPAP of 6 cmH2O to evaluate the low pressure threshold of the mask. As expected, this mask performed at its best on the low pressures. The key to achieving a good seal however, was when I used the smallest cushion. Using even the Medium cushion, leaks were evident even with the slightest of movements. My suggestions is to start from the smallest and work up to the largest (all sizes are included in the package). There is a fitting guide that is included but, try the small ones first.

As the pressure rose, the integrity of the mask to maintain the seal suffered greatly. I felt the most leaks at 12 cmH2O because the ballooning effect of the cushion really starts to push the mask away from the bottom of the nose. Side sleeping is also a challenge as you will inevitably block off one side of the tubing. Fortunately, the other side remains complete open so you will probably not notice a difference in the airflow. I started to wonder, how it affects the Auto algorithm from the CPAP if you accidentally block off one side? I don’t think we’ll ever get the TRUE answer to that question from Philips Respironics on this one. But, in all fairness, my pressure ranges on the downloads did not really change. Repositioning to the sides is probably the problem that one should be more concerned about because it causes large leaks on the higher pressure and some leaks on the low pressures.

Noise: The Dreamwear in general is quiet. Initially, I was concerned that I would hear the air travelling through the tubes around my cheeks, but, surprisingly it was not a problem. The only noise heard was from one of the exhalation vent; as this mask has two vents… yes TWO vents which is another first! One is located on the traditional spot in front of the nose. That did not cause any problems. The second vent on the top of the head where the tube from the CPAP connects to Dreamwear. This vent sometimes hits the top of the headboard or pillow and it resulted in a sound that mimics the sound of air leaks from cushion of the mask. It woke me up a few times and puzzled me in the middle of the night because I couldn’t feel the leak on my face and I could only just hear the sound.

Durability: At the end of the 2 weeks, I tried to be rough on the Dreamwear intentionally. This is quite a tough mask though. It stood up to test where I laid on it, threw it to the ground, and pulled the mask off my face in a rough manner. I also tried to stretch the silicone tube the sits on the face to see if it would tear but it held up very well. The rest of the silicone parts are at par with other masks for for quality but the fabric portion of the headgear still needs improvement. As I mentioned earlier, it is similar to the Nuance line of masks that Philips Respironics came out with last year and the “anti grip” portion at the back of the head will probably start to break down if you tend to sweat a lot. I also have some concerns about cleaning the silicone headgear because when water goes into the tube, it may be hard to dry. On the same token, condensation that builds up may also pose a similar problem. Fortunately during the 2 weeks, I did not encounter this problem since I was using a heated tube with the CPAP.

Overall, the Dreamwear mask is a good alternative to the nasal pillow if having things go up your nostrils is a bother you. You should also consider your CPAP pressure before buying this mask because it is more prone to air leaks with higher pressure settings. But, if you have a tall bridge or narrow nostrils, this just might be the right mask for you. You will avoid the irritation on the bridge of your nose from a standard nasal mask and you won’t have irritation on the septum of your nose from a nasal pillow mask.